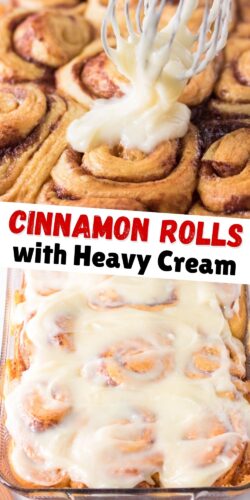 These TikTok Cinnamon Rolls are going viral right now! You start with big canned cinnamon rolls and pour heavy whipping cream over them. Then a mixture of butter and brown sugar gets drizzled on top. Once baked up they get topped with a luscious cream cheese icing that is sure to please.

These are decadent and bake up nice and fluffy, each one tastes like that coveted middle bite. Try this easy recipe and you will never make cinnamon rolls any other way!

The best part about these big, soft cinnamon rolls is that they’re good even when they’re reheated. Have you ever microwaved a cinnamon roll only to get a tough, chewy bite of disappointment? That doesn’t happen here. They’re just as soft, fluffy, and delicious as they are on the first day.

Fellow Cinnabon fanatics will love these semi-homemade cinnamon rolls as well as this giant cinnamon roll in the air fryer which is air fried to perfection and then topped with a homemade cream cheese frosting similar to this recipe. For another sweet breakfast that’s sticky, lick-your-fingers good give my easy monkey bread recipe a try.

Or for the perfect fall dessert, try my cinnamon roll apple upside-down cake. It tastes like a decadent cinnamon roll topped with caramel apples.

Step 1: Preheat the oven to 350º F and lightly grease a large baking dish.

Tip: You can use butter or cooking spray for this step. Butter adds even more rich flavor to the cinnamon rolls!

Step 2: Place the cinnamon rolls in the dish. Set aside the cream cheese icing that comes with them for later.

Step 3: Pour a cup of cream over the top of the rolls, ensuring that you get some liquid between each of the rolls, too. They’ll absorb the cream while they’re baking, making them so light and fluffy.

Step 4: Add half the butter to a small bowl and microwave it to melt the butter in 15-second increments, stirring after each. Once the butter is completely melted, stir in the brown sugar and cinnamon.

Step 5: Pour or spoon the brown sugar mixture over all of the cinnamon rolls.

Step 6: Cover the baking pan with aluminum foil, and place it in the preheated oven. Bake the cinnamon rolls for 30 minutes.

Tip: It is important to cover the rolls with foil before baking to be sure the cinnamon rolls cook through and don’t get too brown.

Step 7: Take the rolls out of the oven and set them aside while you make the icing. Yes, you’re going to make extra icing for slathering these easy cinnamon rolls!

Step 8: Add the remaining butter and the cream cheese to a medium bowl. Microwave the butter and cream cheese for 30 seconds, just until they get very soft. Whisk together until smooth. There should be no lumps.

Step 9: Add the confectioner’s sugar and the 2 containers of icing that come with the Grands cinnamon rolls to the butter and cream cheese mixture, stirring until well combined. It will have a glassy appearance.

Since these viral cinnamon rolls are super sweet, how about pairing them with some savory breakfast foods? Try this sheet pan breakfast pizza if you’re looking for a fun, kid-friendly morning meal. My Instant Pot egg bites are a terrific option for brunch, along with these cinnamon buns. Sausage squares are another crowd-pleasing breakfast dish.

Store leftover cinnamon rolls at room temperature for 1-2 days or in the fridge for 3-5 days. Reheat in the microwave in 15-second increments until warmed through.

You can freeze these delicious cinnamon rolls without the icing for 2 to 3 months. When you’re ready to serve them, thaw them, and then make the frosting fresh.

Add nuts: Mix chopped walnuts or pecans with the brown sugar and butter mixture to add crunch and nutty flavor to the rolls.

Make them chocolatey: Sprinkle some mini chocolate chips over top of the cinnamon rolls before covering and baking them. The chocolate will melt and will drizzle down into the coil, working its way through the rolls. What a delicious treat!

Try pumpkin pie spice: Feeling those fall vibes? Substitute pumpkin pie spice (or apple pie spice) for the cinnamon in this recipe to get even more warmth and flavor and create different variations for autumn.

Maple bacon cinnamon rolls: Go crazy with a really decadent version! Add a teaspoon of maple extract to your cream cheese frosting and then sprinkle the iced cinnamon rolls with crispy, crumbled bacon.

How Do I Make Pillsbury Cinnamon Rolls Better?

As you see with this recipe, there are several ways to make them better. Add heavy cream to make them moist and fluffy. Get even more cinnamon goodness by adding a mixture of butter, brown sugar, and cinnamon. And finally, you can jazz up the icing with butter, cream cheese, and powdered sugar.

How Do You Make Store Bought Cinnamon Rolls Gooey?

This viral hack! Pouring heavy whipping cream over your rolls and covering them while they bake helps get them moist and gooey, just the way you like.

What Is the Frosting on Cinnamon Rolls Made Of?

Cinnamon roll frosting is typically a combination of powdered sugar, butter, and cream cheese, but some recipes may omit the cream cheese.

Should Cinnamon Rolls Be Covered While Baking?

Yes! This will help the cinnamon rolls retain their moisture and aid in the absorption of the heavy whipping cream at the bottom of the pan.

Can You Cook Cinnamon Rolls in a Glass Pan?

Yes, you can cook cinnamon rolls in a glass pan. They make take a couple of extra minutes to cook since glass doesn’t conduct heat as well as metal, so keep that in mind. Remember to butter or grease your pan before adding the cinnamon rolls.

The cinnamon rolls are best served warm but can be warmed up later for a few seconds in the microwave beautifully. Store in an airtight container at room temperature for 1-2 days. Store in the fridge for 3-5 days. This recipe works best with the Grands-style cinnamon rolls. You can use any flavor of them for this recipe. If you're short on time, you can just use the frosting the rolls come with. We prefer the jazzed-up version above. Add some chopped pecans or walnuts to the brown sugar butter mixture for a great crunch.

DID YOU MAKE THIS RECIPE?Please rate the recipe and leave a comment on the blog or share on Instagram and tag #crayonsandcravings!
« Orange Creamsicle Cocktail
Halloween Jello Shots »