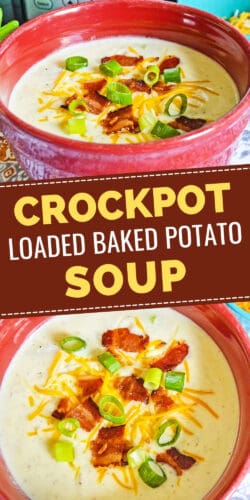 Fall is approaching so slow cooker recipes like this and my chili crockpot recipe are going to be on constant rotation in our house.

Crockpot soups are one of my favorites, as slow cooking really helps lock in all the flavors into each bite.

If you like creamy soup and you like loaded baked potatoes, this slow cooker loaded potato soup recipe is sure to become one of your go-tos.

So print out the recipe below and give this loaded baked potato soup a try this Fall!

How to Make Loaded Baked Potato Soup in Crockpot

Start by peeling and dicing up the potatoes, and place them in the crockpot. (We used a 7-quart crockpot.)

Next, add the broth, onion, and salt and pepper. Cover and cook as directed in the recipe card.

When the soup has about an hour left to cook, you will want to grab a potato masher and break up the potatoes.

Then move over to the stovetop. Add your butter to a saucepan and let it melt. Then stir in the flour and cook while stirring non-stop. You want to let it cook a minute or two.

Slowly whisk in the heavy cream, stir constantly. Let it cook and simmer, thickening up.

Once the mixture is thickened, pour it into your slow cooker and give it a good stir.

Allow the soup to finish cooking, then ladle up and serve topped with bacon, scallions, shredded cheese, and/or sour cream.

In a hurry? Try this Instant Pot Potato Soup recipe.

Store leftover crockpot loaded baked potato soup for up to 3 days in the fridge.

Warm-up in the microwave, in a pot on the stove, or in your crockpot.

Unfortunately, I don’t recommend freezing any leftover soup, as when you thaw out the loaded potato soup it will be kind of curdled and the texture will be different.

Can I use frozen hashbrowns?

Want a shortcut for making this crockpot potato soup? Reach for frozen diced hashbrowns, and use that in replace of fresh diced. It will change the texture a bit, but overall it will still be delicious.

Can I make this soup a day in advance?

This is one soup that doesn’t taste as good reheated. The texture of the potato will change quite a bit once it is cooled off from being cooked. You will want to make this soup the day you plan to eat it.

Can I make this a vegetarian potato soup?

You can make this a vegetarian potato soup by leaving out the bacon and swapping chicken stock with vegetable stock.

Store leftovers for up to 3 days in the fridge. Reheat in the microwave, in a pot on the stove, or in your crockpot.