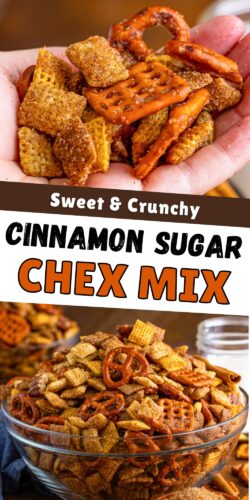 Cinnamon sugar chex mix is a sweet, salty, and crunchy snack mix made with Chex cereal, pretzels, pecans, cinnamon, butter, and brown sugar. Full of cinnamon flavor and baked to sweet, crunchy perfection, this chex mix is highly addictive–one handful turns into ten in no time!

The best part is, this easy Chex Mix with cinnamon sugar recipe makes a huge batch of chex mix- enough for up to 16 people.

Now if you are like me, you may like to have a quick snack on hand for the family to much on or to serve up to unexpected guests. This sweet cinnamon sugar chex mix can be easily made ahead and can be kept at room temperature for up to two weeks. This makes it an ideal make-ahead treat for holiday parties and holiday gifting as well.

If you weren’t quite prepared and need something now, quick, fast and in a hurry, whip up a batch of this 2-minute sweet and salty snack mix.

If you’re in need of a few more snack mixes to serve at the upcoming parties and gatherings, this Fall snack mix is perfect for Thanksgiving or Fall in general, and these Peppermint bark muddy buddies are great at Christmas and throughout the holiday season.

How to Make the Best Cinnamon Sugar Chex Mix Recipe

Step 1. Preheat the oven to 275°F. Line a large sheet tray with parchment paper; set aside.

Step 2. In a large mixing bowl, add all 3 varieties of the Chex cereal, both types of pretzels, and the pecans. Set aside.

Step 3. In a small sauce pot, melt butter over medium-low heat. Add the brown sugar, granulated sugar, and cinnamon. Whisk to combine. Continue to cook and whisk until the sugars are dissolved, about 4-5 minutes.

Step 4. Pour the cinnamon sugar sauce over the Chex mix ingredients in the bowl. Use a silicone spatula to mix the ingredients together until everything is evenly coated.

Step 5. Place the coated Chex mix onto the prepared sheet tray in an even layer. Bake for 45 minutes, removing the baking sheet from the oven and tossing the mixture around every 15 minutes.

Step 6. When it has finished baking, remove the pan from the oven and allow the party mix to cool on the tray for 15 minutes. While the mixture is cooling, prepare the topping by stirring together the brown sugar, sugar, and cinnamon in a small bowl; set aside.

Step 7. Add the slightly cooled Chex mix back to the large bowl. Add the cinnamon sugar mixture and toss to combine.

Serve warm or let it cool completely and store for later use.

Store in an airtight container for up to 2 weeks.

Do I have to use all 3 kinds of Chex?

No. I like the combination of flavors and texture using different varieties of Chex cereal gives the snack mix, but you can use a different combination if you prefer. Just be sure to use a total of 8 cups of chex cereal. You can also try replacing one type of chex with additional cereals such as cornflakes, Crispix, Cinnamon Toast Crunch, or Cheerios.

What else can I add to this mix?

Looking for other mix-in options? You can add more nuts, like pistachios, cashews, peanuts, or almonds. Or add some extra sweetness with mini marshmallows, chocolate chips, or white chocolate chips. Just make sure you keep a similar ratio so the sauce and topping amount isn’t too much or too little.

Can I freeze this sweet Chex Mix?

Yes, if you wish to keep this amazing treat for longer than 2 weeks, transfer the cooled mix to a freezer-safe container or bag and freeze for up to 3 months.

For the crunchy topping:

Store in an airtight container for up to 2 weeks or freeze for up to 3 months.