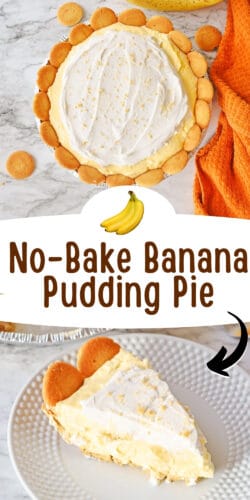 Whip up this creamy, dreamy no bake banana pudding pie in minutes! It’s the perfect summer dessert since you don’t need your oven AT ALL, but your family will beg you to make it for holidays and potlucks. Seven simple ingredients and 10 minutes are all you need to prep this pie.

Banana cream pudding, cream cheese, half and half, Cool Whip, Nilla wafers, and fresh sliced bananas all come together in a pre-made graham cracker crust for the easiest, most delicious dessert EVER. Get all that classic banana pudding flavor in the convenience of a pie!

Let it chill overnight, slice and serve with a big dollop of Cool Whip for a cool and refreshing way to satisfy your sweet tooth.

And let’s face it — no one wants to heat up a kitchen when the temperatures are sweltering. ‘Tis the season of no bake desserts like my No Bake Strawberry Cheesecake, Lemon Icebox Pie, and Strawberry Jello Pie. All the deliciousness, none of the heat.

But you came here for a banana pudding cream pie, so let’s get to it! Check out some of my other banana inspired desserts at the bottom of the post.

How to Make No Bake Banana Cream Pie

Step 1: Add your softened cream cheese to a large bowl. Use a stand mixer or hand mixer to beat the cream cheese on medium-high until smooth.

Step 2: Add the pudding mix to the cream cheese, and slowly add half and half, mixing the ingredients as you go. Continue to mix for 2 to 3 minutes or until ingredients are fully combined.

Step 4: Fold in your sliced bananas gently to avoid deflating the pudding mixture. Don’t overmix; you don’t want the bananas to get mushy.

Step 5: Pour the filling into the prepared graham cracker crust. Use a scraper or spatula to spread the mixture evenly in the crust, smoothing out the top.

Step 6: Press Nilla wafers gently around the edge of the top of the pie. Just slide them in between the crust and the filling, creating sort of a flower look.

Step 7: Cover and place the pie in the refrigerator, letting it chill for at least 2 hours, or until firm. I usually let it chill overnight.

Step 8: Before serving the pie, add the remaining whipped cream on top. Sprinkle a handful of crushed Nilla wafers over the top. Enjoy!

If you want to top the pie with fresh banana slices, wait until right before serving to keep them nice looking.

For best results enjoy your delicious banana pudding pie within one day. After that, the banana will start to brown.

I do not recommend freezing this pie.

Chocolate cream pie: Make a decadent chocolate version of this easy no-bake dessert by trading the banana cream pie pudding for chocolate pudding and swapping out the graham cracker pie crust for an Oreo crust. Skip the bananas and Nilla wafers, adding chocolate sandwich cookies around the rim of the pie instead. Some chocolate shavings over top would look (and taste) amazing!

Lemon cream pie: Use lemon pudding mix in place of the banana variety. Keep the graham cracker crust, and try lemon wafers instead of Nilla wafers around the pie.

Make a low sugar version: Watching your sugar intake? Swap out the pudding with no-sugar pudding mix, and switch to zero-sugar Cool Whip to lighten this easy banana cream pie recipe. Of course, you’ll still have sugar in the Nilla wafers and crust, but this will cut down on the amount.

How do you keep bananas from turning brown in banana cream pie?

The bananas turning brown in the pie isn’t a food safety issue, but it doesn’t make for the prettiest presentation. To prevent browning, toss the banana slices in a little lemon juice before folding into the pudding mixture.

Do I need to cook the banana pudding?

No, you don’t. This recipe is super easy and uses instant pudding that requires no cooking at all. Your pie doesn’t need to spend any time in the oven, either.

Do I follow the directions on the box of pudding mix?

No, do not prepare the pudding according to the package directions. Just follow the instructions in the recipe card to get your no bake banana pie absolutely perfect.

Looking for more easy recipes with delicious banana flavor? Try one of these mouthwatering desserts. 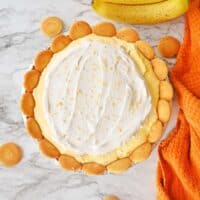 Cover and refrigerate for up to one day.

DID YOU MAKE THIS RECIPE?Please rate the recipe and leave a comment on the blog or share on Instagram and tag #crayonsandcravings!
« Banana Split Fluff
Watermelon Jello Shots »