↑
You are here: Home » Family » Fun with New PAW Patrol: The Movie Toys 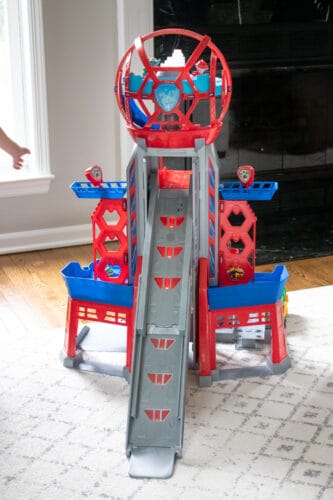 This post was sponsored by PAW Patrol as part of an Influencer Activation for Influence Central and all opinions expressed in my post are my own.

Our 4-year-old son is a huge fan of PAW Patrol. He enjoys watching Chase, Marshall, Skye, Rubble, and the PAW Patrol crew as they work together to save the day.

So when I heard that PAW Patrol: The Movie was coming out, along with a fun new line of movie-inspired toys at Walmart, I knew that my son would be super excited.

As a parent, I can really appreciate PAW Patrol as well. The program helps to teach children the importance of community helpers such as police officers, fire fighters, and rescue workers. It also demonstrates the importance of teamwork as the pups work together to succeed in their missions.

We surprised our son with the new PAW Patrol Movie Ultimate City Tower Playset along with Skye, Rubble, Zuma, and Rocky’s Deluxe Vehicles.

The look of pure joy on his face when he saw the huge PAW Patrol Movie Ultimate City Tower Playset box was absolutely priceless.

The Ultimate City Tower Playset comes with all 6 pup figures, as well as Chase’s police cruiser and clip-on backpack. Other toy cars are sold separately.

He loves playing with his new PAW Patrol toys and sending the characters on the rescue to save the day!

The tower is just like the PAW Patrol pups’ actual Adventure City headquarters. No detail was overlooked, this playset has everything.

Our son was so excited to discover all the fun features, lights, and sounds of his new PAW Patrol playset.

He leads the PAW Patrol pups on missions and high-stakes rescues right at home in our family room!

He parks the pups’ vehicles in the garage at the bottom of the Ultimate City Tower, drives them into the gas station to gas up before he brings them up the tower on the vehicle lift.

He uses the pup elevator to bring the pups up to the command center at the top of the tower.

Then he sets all the pup figures up around the holographic city map and uses the light up pup selector to choose which pup will go on the next mission.

When it is time for a mission he sends the pups down the slide and into their pupmobile!

Then it is time for his very favorite part–pulling the handle to transform the Ultimate City Tower by opening up the front panel to reveal the large light-up rescue ramp. He sends the vehicles down the ramp and loves how it lights up, just like in the movie!

He was also excited to discover that Skye has her own helipad as well! He loves taking off and landing her helicopter on it.

Our little hero has been having an absolute blast playing with his new PAW Patrol Movie Ultimate City Tower Playset and Deluxe Vehicles.

Have a little hero at home? Visit Walmart or Walmart.com to shop for PAW Patrol Movie Ultimate City Tower Playset and other toys inspired by PAW Patrol: The Movie!